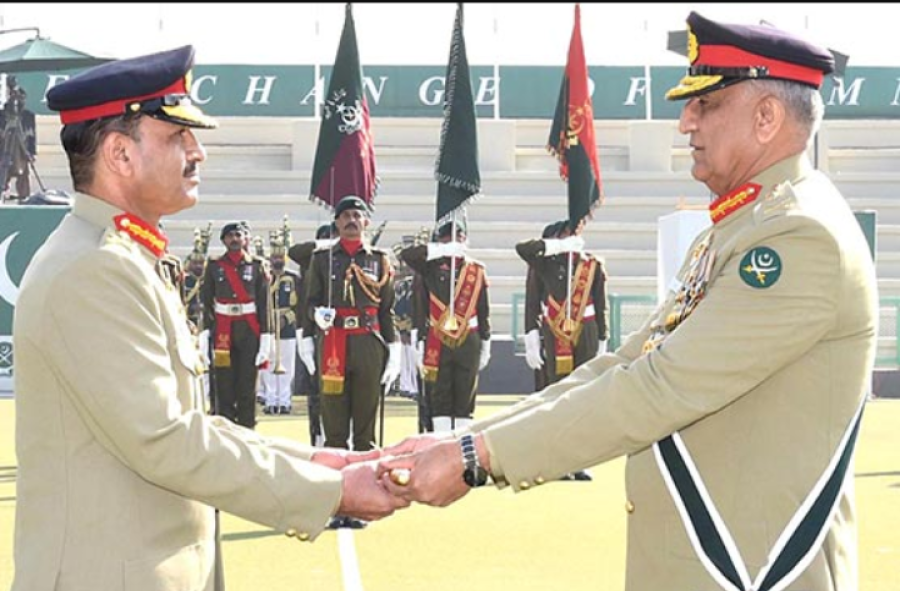 The services of General Qamar Javed Bajwa, the arrival of the new army chief, challenges and leadership of the country…

In the 75 years of Pakistan’s history, there has never been a level of excitement regarding the appointment of the Prime Minister as it was done a few months ago. General Qamar Javed Bajwa will retire from his position and a new army chief will be appointed in his place. General Bajwa made it clear in August that he would not take the extension or talk to him about it, but it seems that the issue of the new army chief or the extension will be made on social media. Before this appointment was made, there was a state of excitement which greatly influenced the spread of the news, and there was no basis. At the appointed time, the Prime Minister of the Islamic Republic of Pakistan, Mian Muhammad Shahbaz Sharif, in the fulfillment of his legal and legal responsibility, appointed the new commander of the Army Hafiz Syed Asim Munir and the new Commander-in-Chief Sahir Shamshad Mirza.

The message of Pakistan is a great progress in terms of religious harmony which is appreciated all over the world and not only signed by the most important leaders of the Islamic world including Imam Kaaba, Sheikh Al-Azhar was also appreciated. done

Message The way General Qamar Javed Bajwa worked day and night for the completion of the Pakistan Charter, the many hours of meetings he held with scholars, elders and religious leaders is part of history. and cannot be forgotten. Alhamdulillah, the attitude of the world towards Pakistan has changed after a document like Pashaham Pakistan, those who used to accuse Pakistan of spreading terrorism and terrorism, saw the peace service of the Pakistani army. and security agencies.

The role and hard work of General Qamar Javed Bajwa regarding modern education and foreign affairs in Madrasa Arabia cannot be forgotten.

It is true that all these actions should be done by the political leader, but if the political leader does not fulfill his duties, then someone else should do this work and General Qamar Javed Bajwa has done the right thing. the country within and between religions. and staying well abroad, he has done these services in reforming Pakistan’s foreign affairs in the world and even Imran Khan himself has agreed, but now General Bajwa has left and Imran Khan and his group know that General Bajwa knows. it is not possible to make it easy for them anymore, so he started a series of sad complaints. The sad part is, when a person stands in a position, his praises do not end and when he leaves this position, all the flaws in him begin to be seen.

This is as clear as day and it cannot be denied that one side of Imran Khan has been asking General Bajwa through various sources and even some foreign friends to extend and support him. to him in any way but on the other hand Syria continued to criticize them. and this is why after the assassination of Arshad Sharif Shaheed, as part of a plan, the Pakistani army, the commanders of the army and security forces focused and planned to launch an attack against him DGISI Lt. Gen. held a press conference with DG ISPR Lt. Gen. Babar Iftikhar and put the facts before the nation. No one can deny that his press conference was a statement that lies cannot be accepted anymore and the truth must be brought out and when the Pakistani army and the officials of the protection from politics, if so, then why criticize them morning and evening.

After General Qamar Javed Bajwa, the new Army Chief, General Hafiz Syed Asim Munir, assumed his post and those who know General Hafiz Syed Asim Munir say that he is a perfect soldier and a man who have a relationship with God. his service and responsibility for the army testify to this, and it is also a matter of pride for Pakistan in the Islamic world that the commander of the Pakistani army is a Hafiz of the Qur’an and a family of heirs the Messenger. of Allah ﷺ.

The biggest challenge for the Chief of Army Staff, General Hafiz Syed Asim Munir, is the situation in the beloved country of Pakistan, where on the one hand, the opponents of Pakistan want to create a division between the government and the army of Pakistan. , and on the other hand, the economic and financial situation of Pakistan. 30 million Pakistanis affected by floods are waiting for help and unfortunately our political and religious leaders are not focused in this matter and the government alone cannot assume all these responsibilities. received for helping the victims of the floods by establishing relations with friendly countries is important and the new commanders will also do their services in the same way, God willing. Along with this, Pakistan needs a lot of work abroad, the Prime Minister Mian Shahbaz Sharif is working hard with his team abroad, but the general must also play his role. India is making its position in our friendly countries compared to the past and because of the lack of equality in front of the outside and thus changing the attitude of India in Kashmir.

The new army chief made his first visit to the Line of Control and his first statement clarified Pakistan’s position on India-Pakistan relations and Kashmir and put an end to all the misunderstandings and propaganda spread for a few months ago. The speech of the new Chief of Staff General Hafiz Syed Asim Munir on the Line of Control is an expression of the needs of the country. Likewise, the situation in Afghanistan and the situation after the announcement of the end of the ceasefire by the criminal Tehreek-e-Taliban Pakistan is also in front of the new commander.

Power and animosity have increased in the political arena. Politicians are not ready to talk to each other, uncertainty and violence are increasing, there is a need to learn from the mistakes of the past and start a new beginning. Political leaders were born with a sense of cynicism and hatred and intolerance. Sit on the negotiation table and think about Pakistan. The struggle against Pakistan Army and security agencies should be stopped knowingly or unknowingly. An agreement should be made in Pakistan for the economy, social stability, electoral reforms and the judiciary in the country. The invitation was given by the Prime Minister of Pakistan Mian Shahbaz Sharif, the leader of the opposition. in the National Assembly. If Imran Khan thinks that he will get the election without discussion and negotiation with other political parties, then he should leave this idea. Tehreek-e-Insaf is no doubt a big party, but PDM and other parties are the parties of Pakistan. Elections should be held by political parties, not the establishment, and the sooner Imran Khan and his party understand this, the better. Since the foundation is separated from all these politics and now there is no help for Imran Khan.

Note: This is the personal opinion of the author and does not agree with the organization

Lahore Qalandars released the teaser of their songSUCHI News

The Ministry of Defense apologized for protecting the election processSUCHI News

The imported government has violated the constitution and laws: Farrukh HabibSUCHI News

Lahore Qalandars released the teaser of their songSUCHI News

The Ministry of Defense apologized for protecting the election processSUCHI News

The imported government has violated the constitution and laws: Farrukh HabibSUCHI News